This week's excavations have fundamentally altered our understanding of Barby village's history as we know it. You have been warned.

To recap from the last few weeks, we have found very little of relevance; a modern sheep tooth, and a couple of bits of iron age pottery that came from an unsecured context. So this week, we extended the trenches northwards and southwards, and taken them down to an average depth of about 70cm, removing all the modern spoil. While our finds from last week could be counted on one hand, this week's iron age finds alone far exceeded our expectations! And we also have some lovely features that are contemporary with a small to medium-sized iron age village.

So, the finds. The vast majority of our finds looked like this: 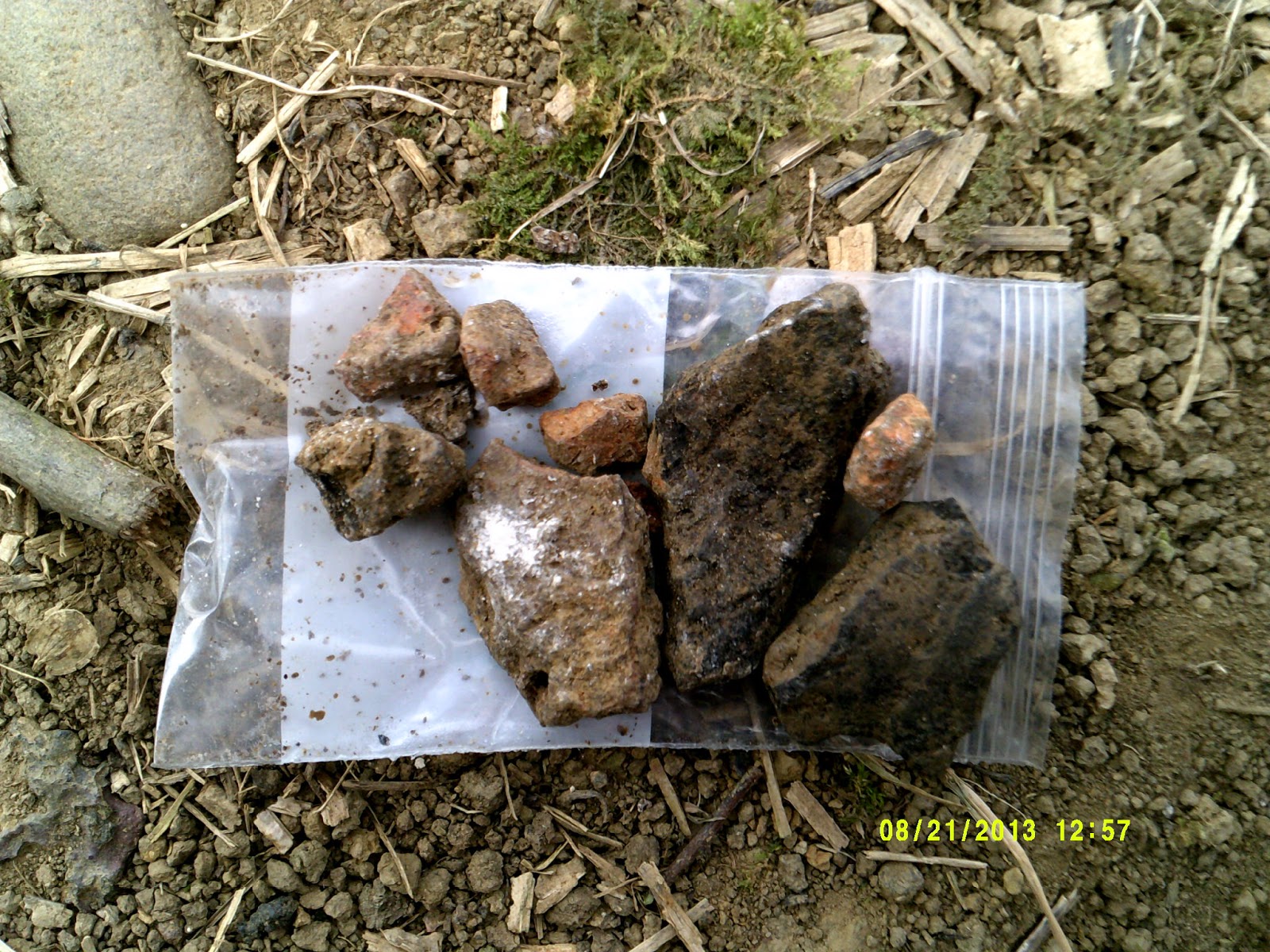 Whil you could be forgiven for thinking that htese are just pieces of mud placed on a plastic sheet, I can assure you that a lot of these pieces (or pottery sherds, to use the correct terminology) are mid-late Iron Age in date, and are common to iron age settlements in Britain. Some of them are actually in a distinctive rim shape (see below), so it cannot be a naturally-occuring stone fragment. Their black appearance may be due to the use of plant material as a tempering agent i.e. during the process of firing these pots, plants were wrapped around the pot to give it some structure, so it wouldn't fall apart! This leads to charcoal being found in lumps inside the pot (known as inclusions-see next sentecne), but sometimes also contributes to the black colour of the pot. Some of these pots contain "inclusions" or small additions, like small pieces of stone, which can tell us the sort of geological area that these pots were made in, or what was added to the clay before firing. In this case, they are likely to be materials that came from the local area. In addition, as you can see, there is more than just black pieces of pottery, there is some more reddish-coloured pieces, giving us a more varied picture of the pots that were used during this time. Often the pots would be used for all manner of things, including cooking and storage. However, the excavation has not yielded any other Iron Age finds... yet (except for charcoal)! 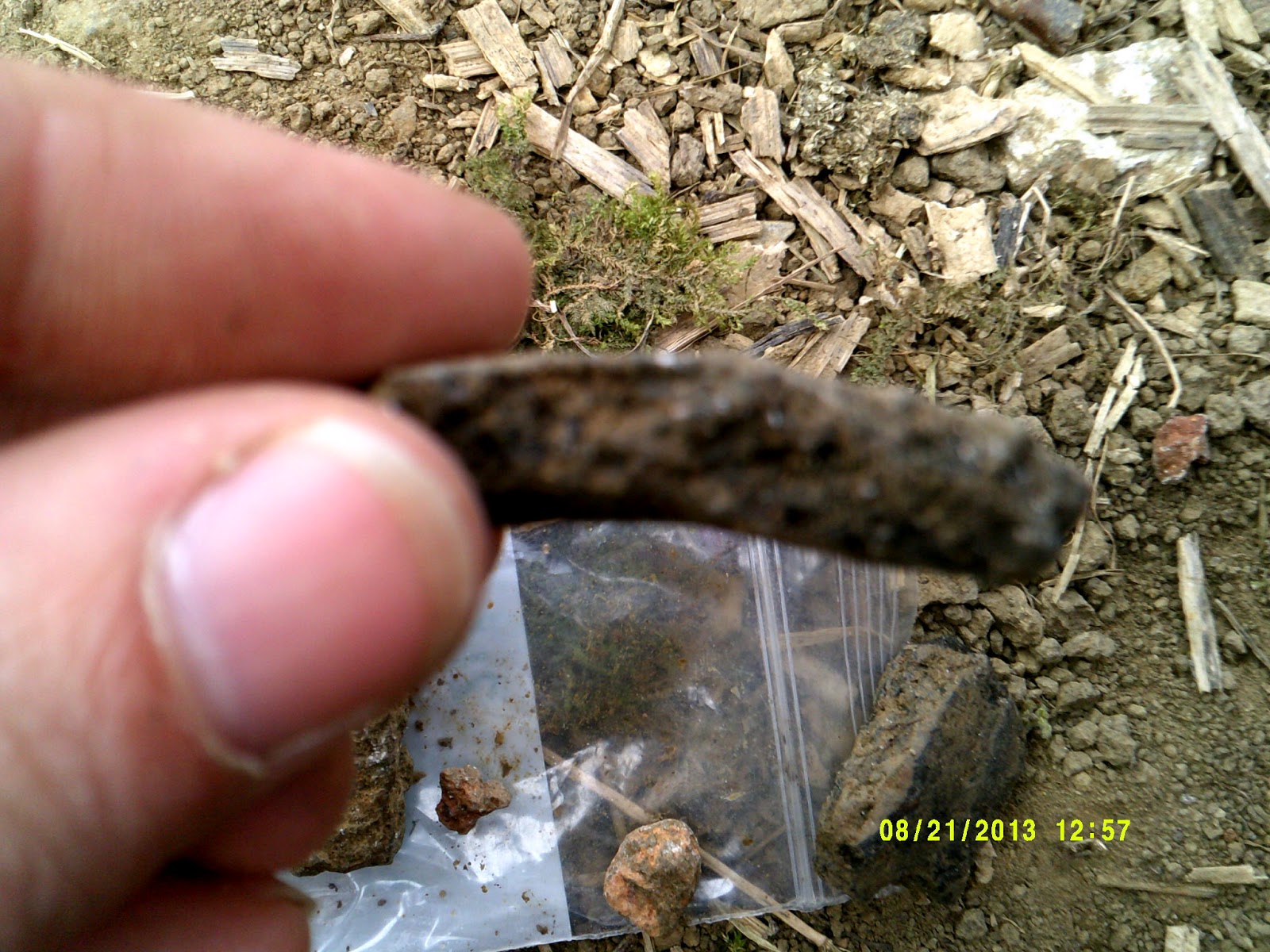 This particular example has a nice rim to it, indicating part of the shape of the pot. This will be important for later analysis to tell us what these pots were used for! (author's own)

But what has come out of the ground unexpectedly are two features, which can be related to building activity and a possible working surface! The former is known as a post-hole (see below): this feature would have contained a wooden post (hence the term post-hole), that coulde have been used as part of a fence, or a house, or a granary, and so on . We need more post holes to prove that it being used for one of these structures. The hole here contained some charcoal in a secure context, i.e. it has not been disturbed since it was sealed. This proves that a wooden object was placed within the structure at some point, either burnt during it's last days, or a small wooden object was thrown into the hole before it was sealed; we can't tell yet.
The locally made pots were almost certainly made within the household, probably by male, female and juvenile members of the family. Hence, this was a cottage industry, which was fairly common, not dissimilar to pre-industrial revolution styles of making many household goods. The question is now can we find something more exotic, to show that this site was known to outsiders of this community? We believe that a major prehistoric road ran near the settlement, on a NW-SE trajectory, so we may find evidence of say metalworking, or maybe even artefacts created using materials from the coast! 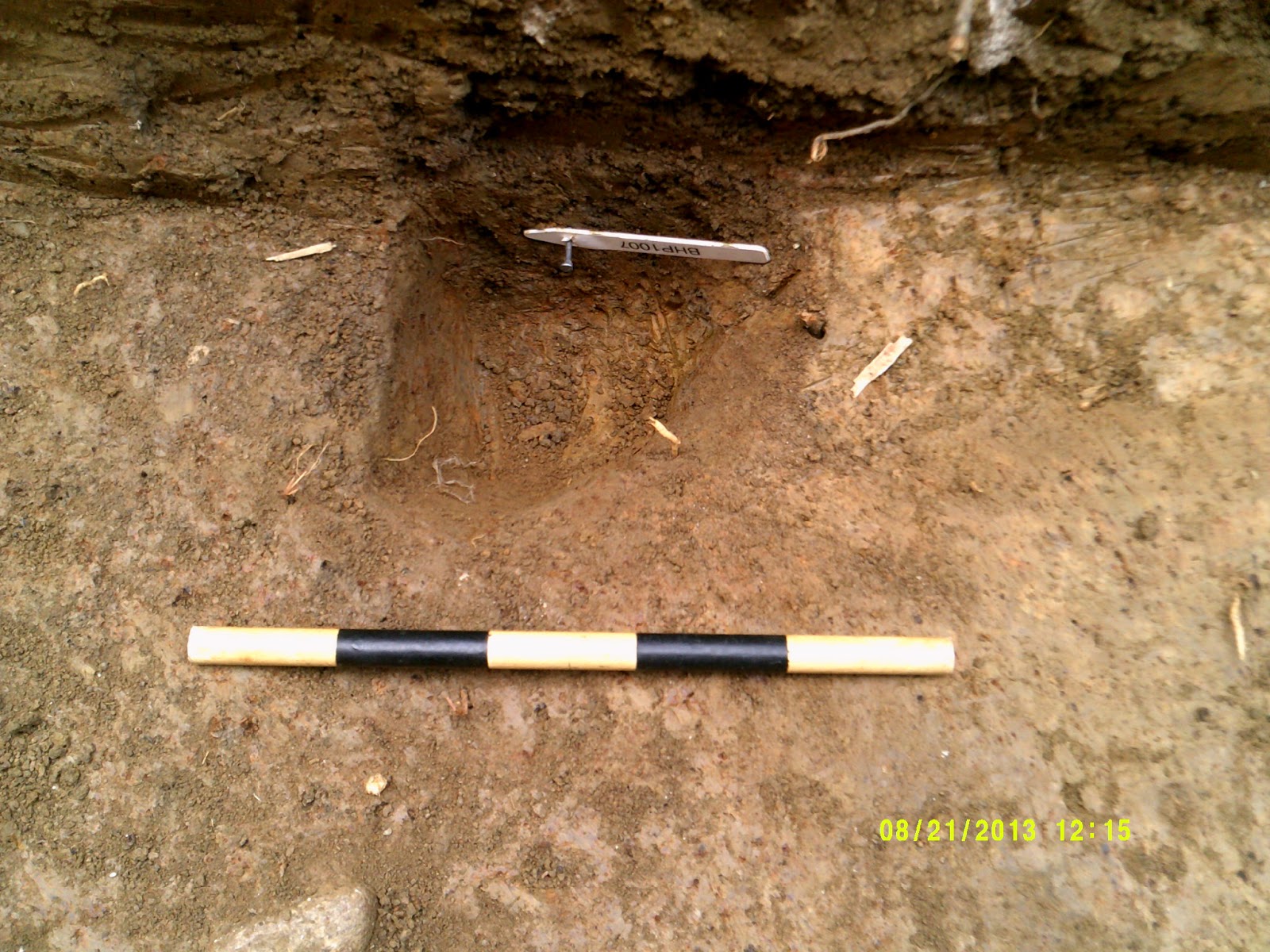 Tis post hole is about 25cm wide and 12-14cm in radius. This should help us to reconstruct what sort of iron age building was being used here!

The working suface I mentioned is very peculiar, because it is a hard layer that contains a smattering of small stones, that appear to have been cracked in half. Why would you crack your stones in half? If they were the wastage from the pottery process, then we would expect to see burn-marks on the stones. But we don't. Are these the remanats, then, of an early trackway, or a courtyard? More importantly, the pottery fragments have been coming from this layer of softer material, but also right on the boundary of the context of these suspected features (both the post-hole and the working surface)! This almost definitely shows that these features are Iron Age in date, given that thay have been undisturbed for over 2,000 years! 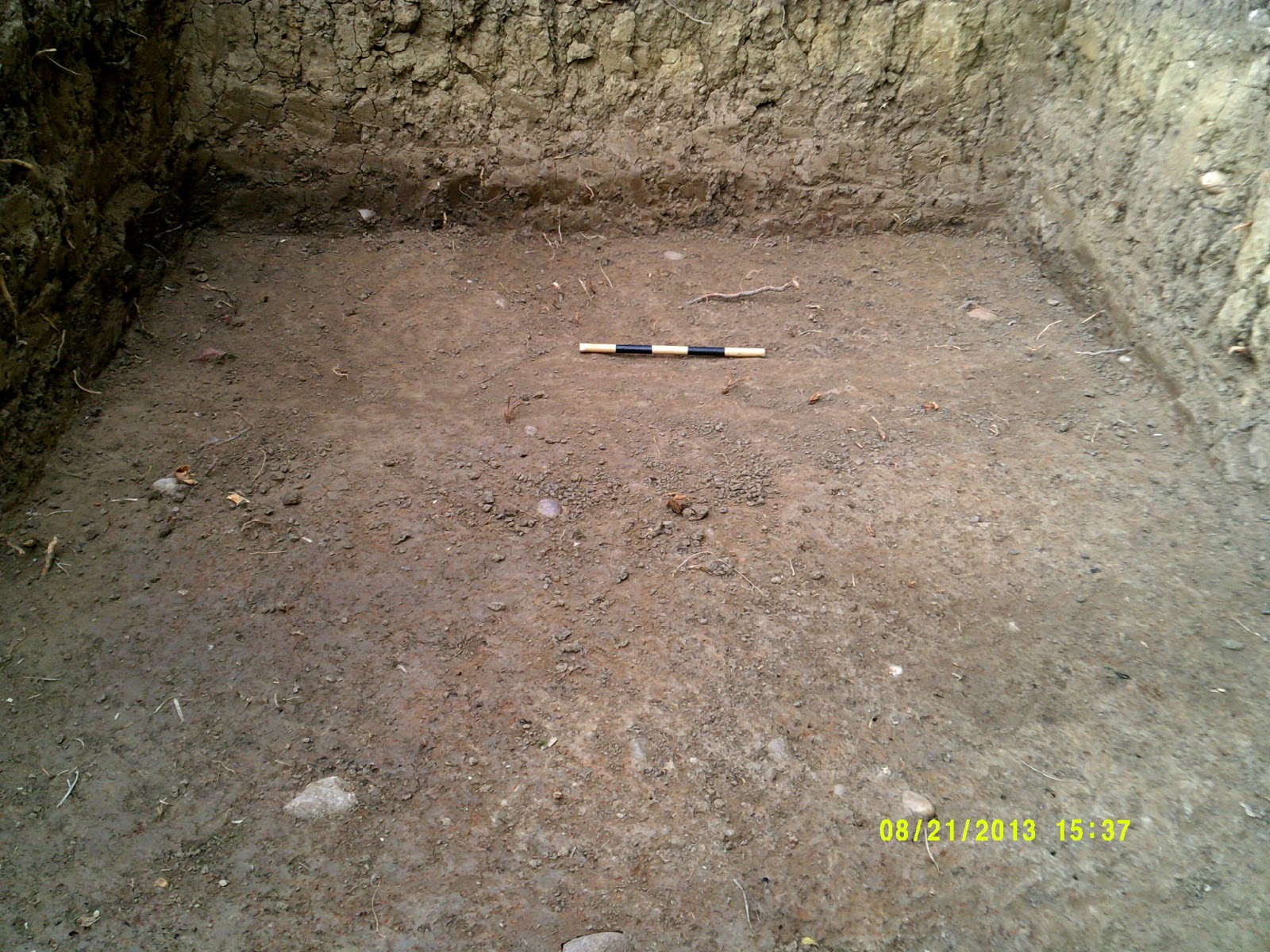 While not very clear, there is a harder surface containing stones in the centre of this picture, while the scale is on a softer piece of ground.

Why is this so groundbreaking? Well, all the previous focus on Barby's settlement history had been on the medieval, Viking and Saxon periods, with Barby's modern origins probably coming from the Saxon period. This has been because of a biased use of historical evidence. Most of the surviving archaeology around the village is medieval or post-medieval in date (mostly ridge and furrow, and some outlines of a house and a probable manor house, as well as the church, which is over 1,000 years old!), which gives a misleading impression of Barby's origins.

Before this excavation, no one had suspected that Iron Age people had settled here; even the project director was somewhat uncertain! But now, with this evidence of definite activity, we can trace Barby's (pre)history back into possibly the middle Iron Age, and almost certainly into the late iron age (i.e. some 2,200 years ago, or even 2,500 years ago); this would extend the village's history by almost 1,000 years from the Saxon origins of the current village! Thinking ahead now, we can ask questions like why did they settle on this flat piece of land overlooking the west midlands? How can we relate this settlement to the more modern village of today? If so, why did the village move eastwards (some 750 metres to be precise) to it's current location during the Dark Ages (i.e. the Anglo-Saxon and Viking periods)? Given that Barby's name has been researched already, do we have to reassess it i.e. does Barby's name come from Viking (Barby roughly translates to "hill-top settlement"), Anglo-Saxon (Barby roughly translates as "barley", indicating it's proable main commodity, apparently) or even from Celtic origins (no suggestions yet)? Just how large was this settlement? And if it was a significant site, what was it's influence, compared to other local sites, like Borough Hill (a defended iron age site, which could be contemporary in date) in Daventry, just a few miles to the south-east?

Unfortunately this is the end of the unofficial diary, since I will be off to Italy on the Etruria Nova- run excavations in Tuscany! I will have lots of lovely photos to put on this blog...

Any comments/opinions are very much appreciated for this post!
Posted by Alistair Galt at 11:57