So this week I have been on two excavations (and done 3 days part time work!); Barby Hill and New Place, Stratford-upon-Avon (the Digging for Shakespeare project). More on that in a second, but first:

The good news? We've found archaeology! It started with a sheep tooth on wednesday morning, and then some likely Iron Age pottery sherds! In addition, a probable partial sheep jawbone was also found, all in the same context( i.e. the same layer/ time period of deposition). Could this be an Iron Age ditch, full of rubbish that, in the next few days, will reveal the lifestyles of these ancient people?   The bad news is that these were found with a Victorian floor tile. Oh dear... this means that either the pottery and sheep tooth are relatively recent, or that the context we have found is not an archaeological feature; or worse, if it is a feature, it has been heavily disturbed, and probably not by the reservior's construction. The geophysics wants us to believe that a feature is somewhere along our trench. There will be some pictures of the trench in the next update!!

This has been without doubt one of my favourite digs I have ever been on, not least because this is the 4th year that I have been here! Although I am not actually excavating this year, I am still helping out with other tasks, such as backfilling, washing finds, and generally explaining the site to tourists. in previous years volunteers have been participating in the excavation of the building. 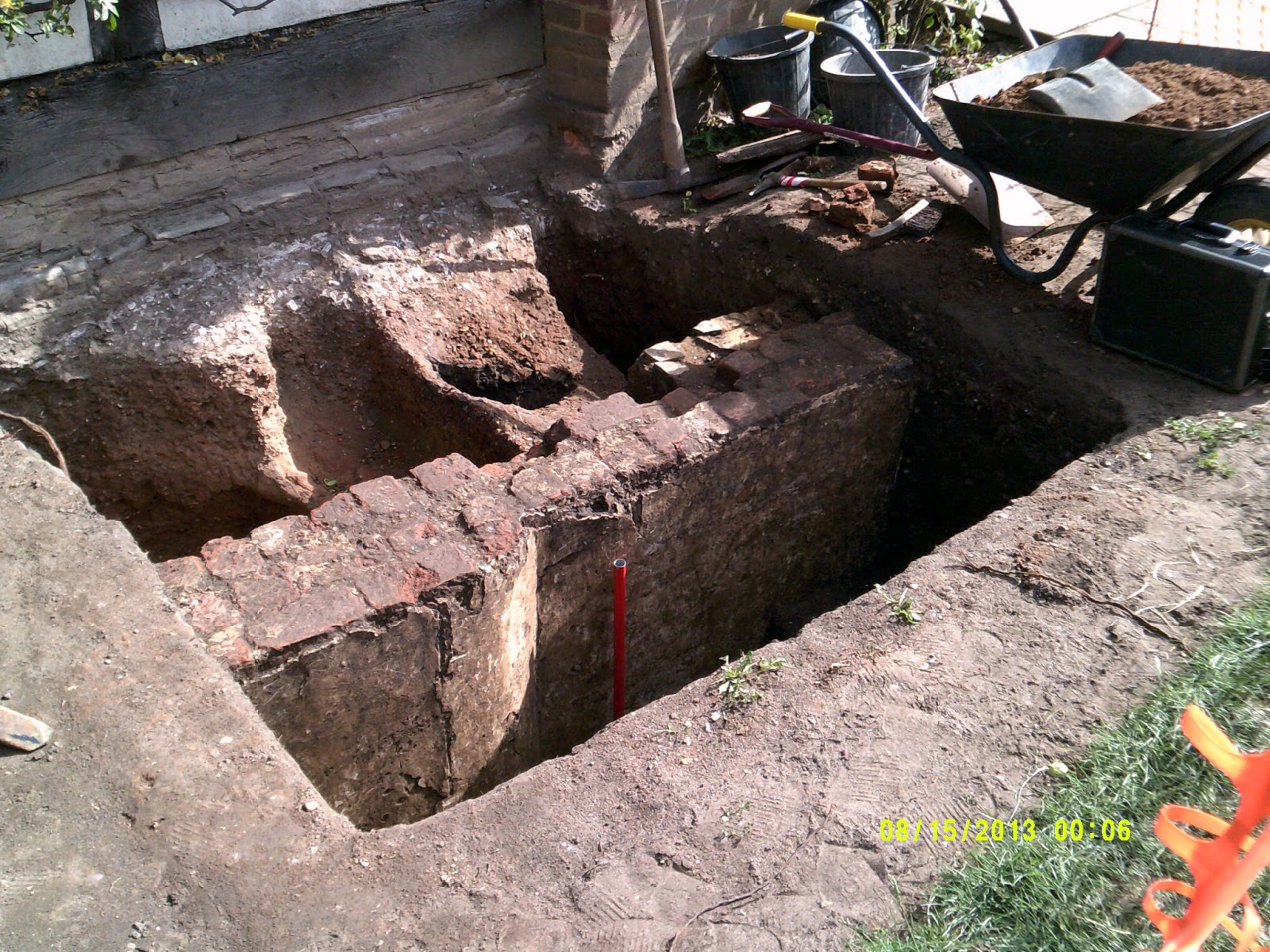 One of the trenches this year; an 18th century wall that may have been part of Shakespeare's house! (author's own)

So why did they decide to excavate here in the first place? Well, New Place was Shakespeare's largest house in Stratford; he purchased it once he became rich enough to buy it! Shakespeare is also reputed to have written some of his later works like the Tempest, and he may also have died here (he's buried in a nearby church). However, New Place passed onto various families after his daughter's death in the 17th century, and in the 18th century it was initially rebuilt, then a Yorkshire vicar burned it down because he refused to pay full tax on a property he only lived in for half the time! He also tried to cut down the mulberry tree that Shakespeare planted in the garden behind the house. So now the house is nothing more than just a few foundation walls and a lot of burnt material. 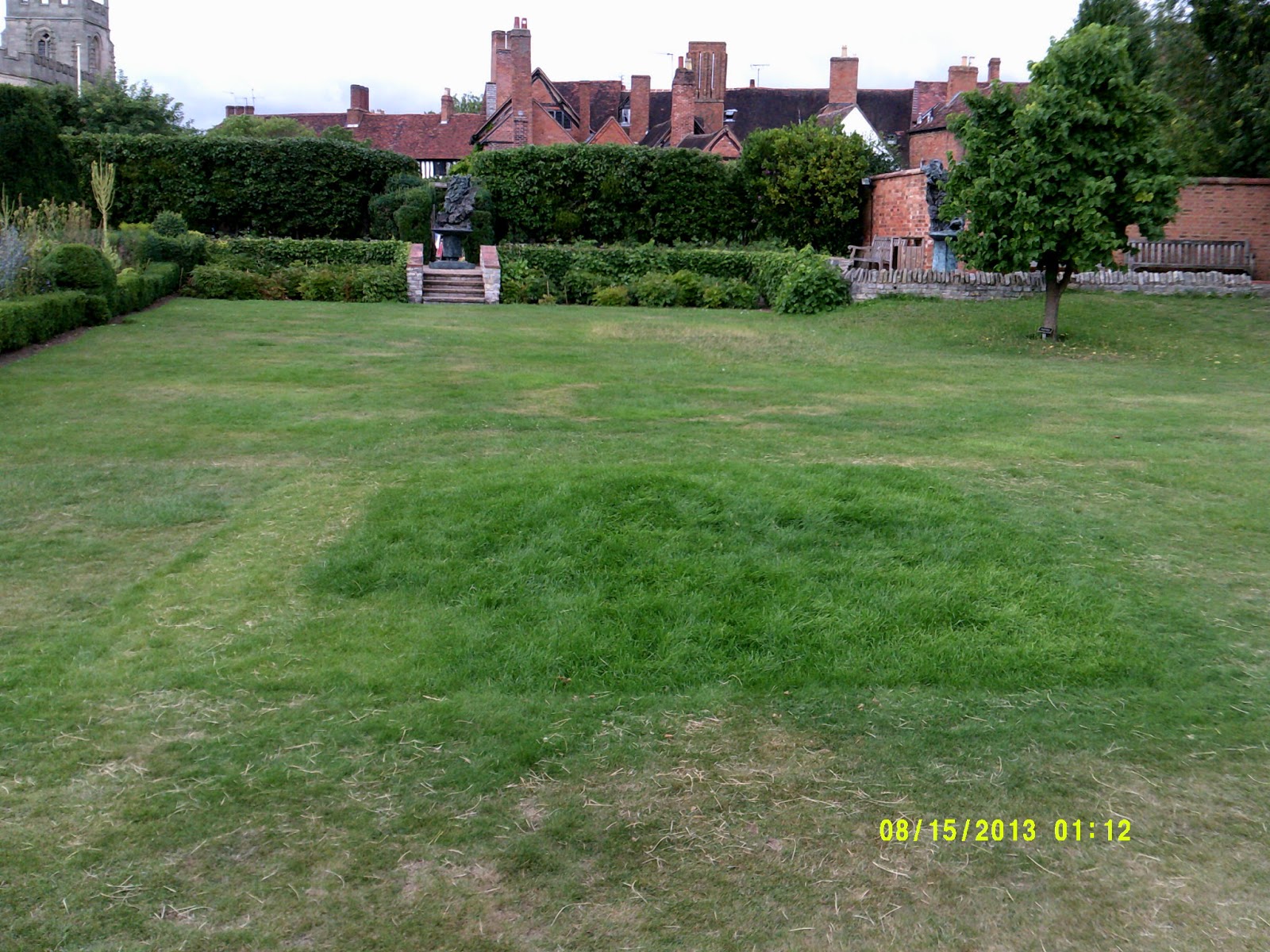 The site of one of the older trenches from last year's dig. (author's own)

Or so we thought it was! In the 19th century the local antiquarian Halliwell Phillipps spent 2 years excavating, nearly 150 years before the most rrecent excavations (Mitchell 2010). Unfortunately he didn't concentrate on anything more than the walls themselves; a lot of perfectly good artefacts were simply thrown back into the ground! For more information on the property, including finds from the excavation from 2010-2012, click here and here. 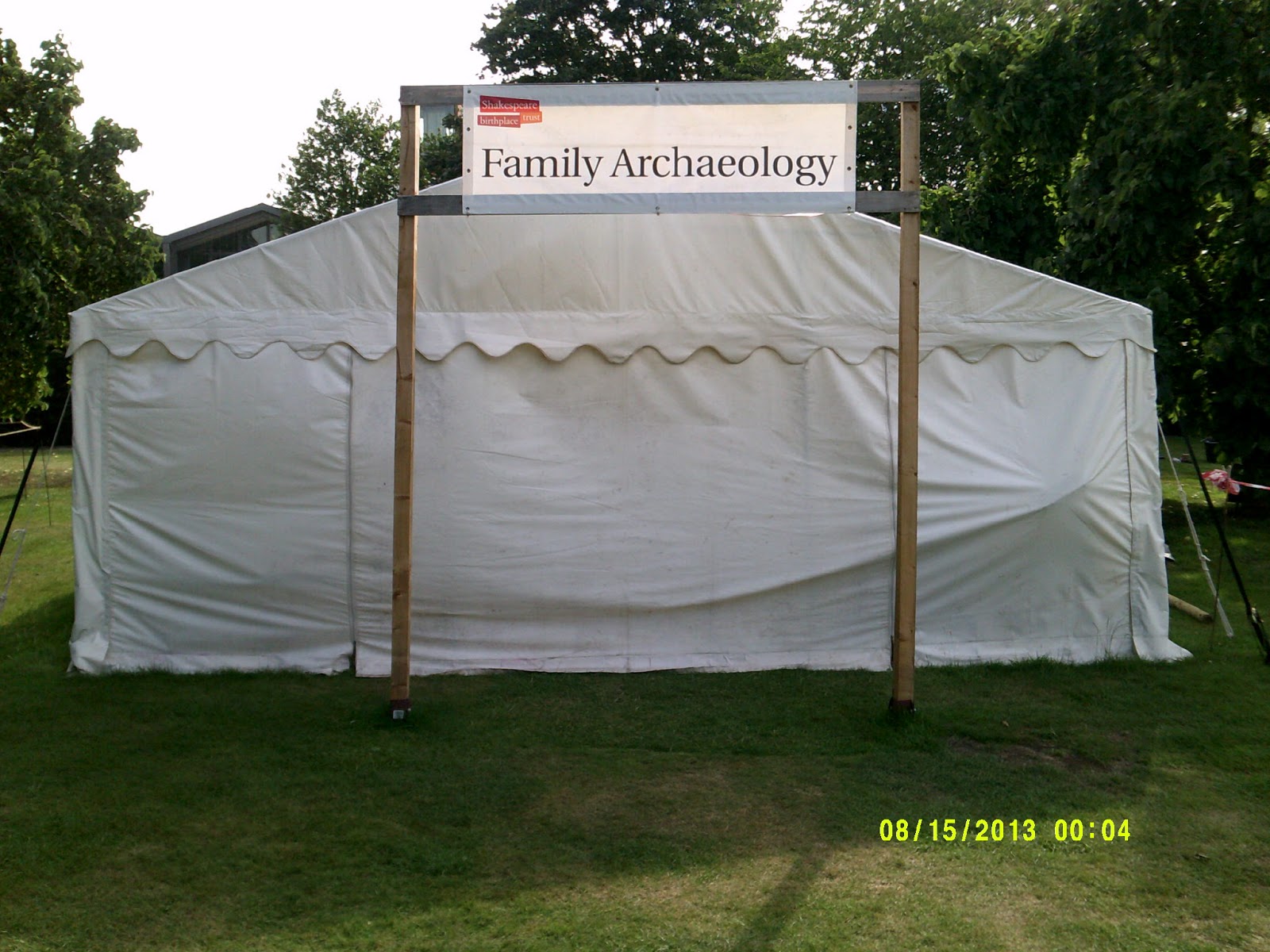 The family archaeology tent, in the gardens. There's an old theatre buried under this garden!! (author's own)

But back to this year, and this excavation has been scheduled for only 2 weeks, rather than 6 months! Therefore, these trenches have been targeting walls that may have a particular significance, in potentially redefining the history of the house. This may sound rediculous; yes, there are historical sources, and yes, there are old plans of the house, so why are we chasing walls that have already been drawn? The problem with these older plans is that they often have an asthetic bias to them, or in layman's term, people wanted to draw for the sake of drawing, rather than for planning applications. So they might have deliberately missed a wall, just because it was obscured by another feature. Even the more recent plans from the 18th and 19th centuries are, while more objective, subject to human error. So a new plan would not go amiss for the final report (due for 2016).Furthermore, the team have found that the New Place wall does not run parallel to the house next door. What does this mean for the house? We know that the house has medieval origins, but not it's relationship to other houses i.e. which houses were built first? 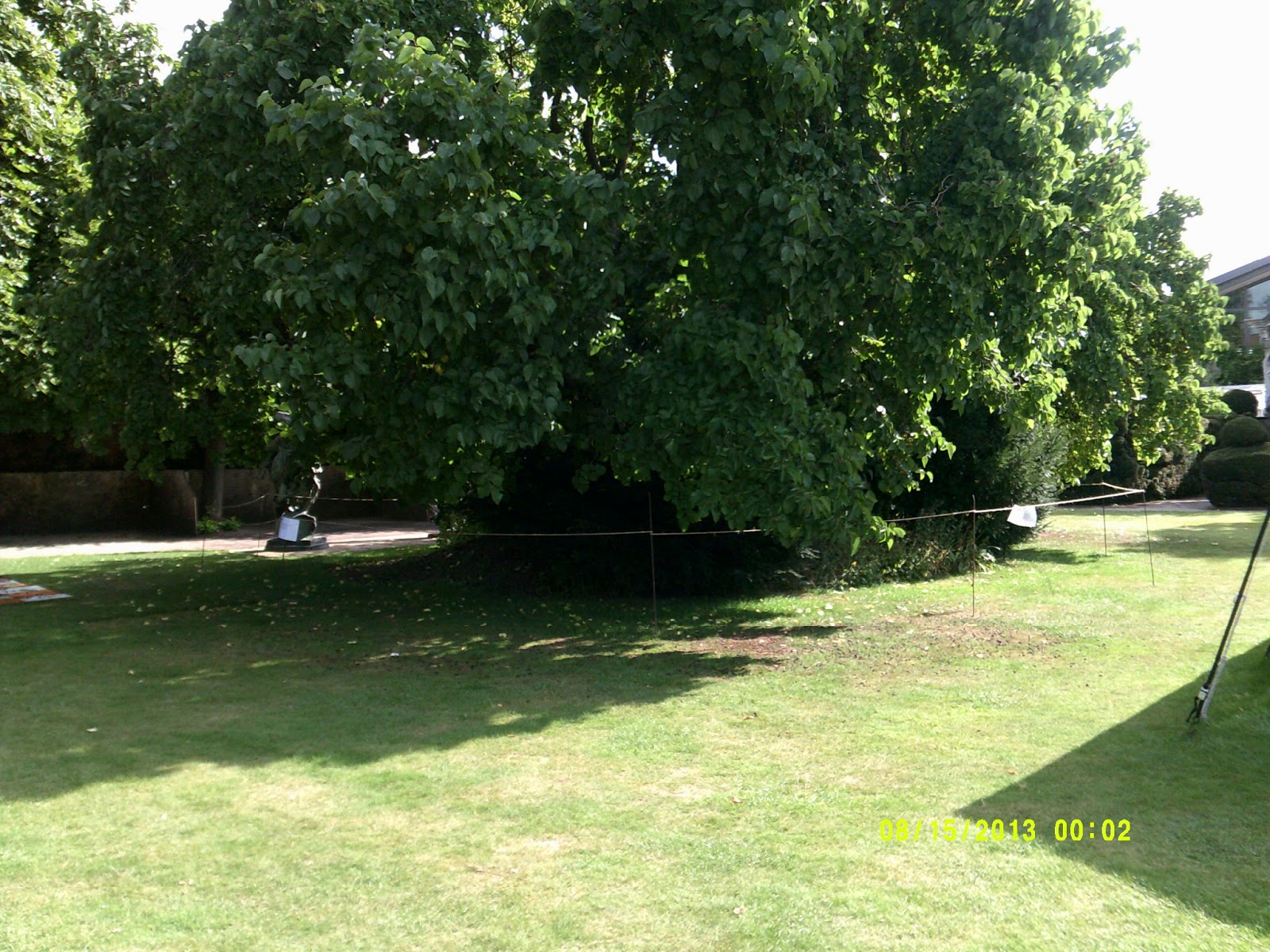 The very tree that Shakespeare planted, and nearly chopped down by an angry vicar! (author's own)

One of the surprises of the Digging for Shakespeare excavation has to be the Iron Age pits that were found last year! These were completely unexpected, and confirmed suspicions that the Romans were not the first settlers of Stratford-upon-Avon. We are unfortunately unlikely to find any more with the time we have left, but nonetheless they have extended the lifespan of New Place into prehistory. We hope that the full report of the excavations will come out in a few years time. 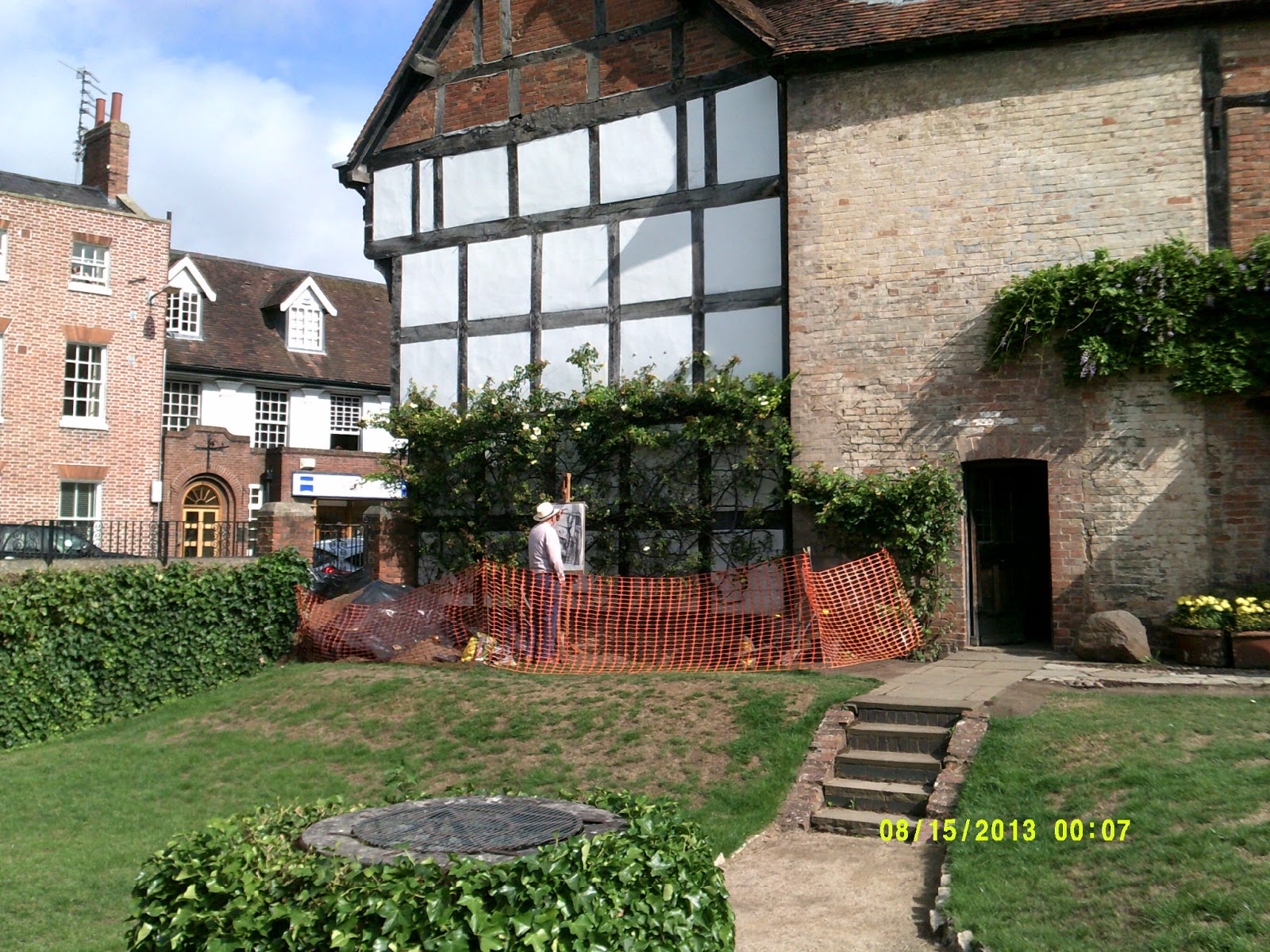 Nash's house, next door to New Place. Would they have been touching in the old days? We don't really know for sure... (Author's own)

What makes the dig so special is the volunteers who give up their time; people from all over Warwickshire and beyond! They have become really enthusiastic about it, and many of them, like me, have given up their tim over the space of 4 years to come and see this site evolve, and allow us to find new discoveries about Shakespeare's house, such as the Iron Age pits. I think this is also an example that other excavations can follow, if they think that using volunteers is the way forward. The York Archaeological Trust, incidentally, have been using volunteers sucessfully for over 40 years in excavations across York!!

These two sites show just how diverse the archaeology is underneath our feet, and how the general public can get involved!

P.S. on an unrelated note, read this opinion on the fracking situation in Britain! http://losttimelady-geologist.blogspot.co.uk/2013/08/an-open-letter-to-frack-off-community.html