Time for more 5 fun facts! This time I'll be focusing on the history and archaeology of Hampshire as a county in general:

1. The origins of the county are linked to the Anglo-Saxons and the formation of Wessex, as well as the centre of what became England; the first mention of Hampshire (although disputed) appears to be in 755, as "Hamtunscir"; apparently however, this is not to be confused with the "Hamtunscir" of Northamptonshire that appeared in 1011! (Grant 1989; p.67,p.103). The county takes it's name from the Saxon settlement of Hamwic, now the modern day Southampton (see my previous blog here). In addition to this, it is also known that there was Roman and prehistoric presence  in the Southampton area too! 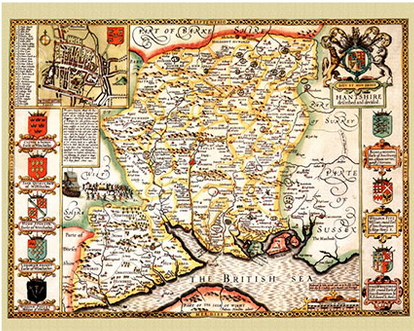 
2. The New Forest is famous for being a Medieval royal forest, but it was also the centre of Roman pottery production and the beginning of the Saxon invasion of England! The heathland that you see today is partly the result of Iron Age woodland clearances (New Forest National Park 2013). More recently, excavations are showing the impact World War 2 had on the area as well (see here, Wessex Archaeology 2012).

3.Below is a map of all the known shipwrecks in the East Hampshire coastline! There are far too many to    go over individually; but this website that allows you to look through wrecks in the area and beyond, including the aptly named HMS Hampshire, which sank in the North Sea (http://www.wrecksite.eu/wreck.aspx?10355).

.Image 2: Shipwrecks in the east Solent( channel. Note how they are facing mostly to the west
(http://www.romseysac.com/diving/wreckdatabase/hampshire.htm)

5. The modern Hampshire County Council was established in 1889, but only obtained it's "modern" coat of arms in 1992 from the College of Arms to celebrate it's centenary! The lion represents Winchester's former status as England's capital during the Middle Ages, while the Stag represents the New Forest, and the castle represents Hampshire's importance in the "defence of the realm" (possibly an inspiration for the World War One Act (D.O.R.A.)?). The rose is the county badge, like many other counties in England. However, this is not the actualy logo of the Council, but just to to maintain the tradition of having a coat of arms for any self-respecting individual or concern, since the council is strictly speaking in service to the royal family (because the government has every law approved by the queen, which is a formality these days)! (Hampshire County Council 2012) 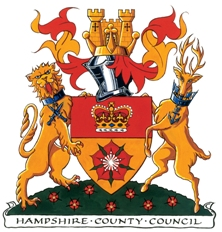 So there we are! Next time, I may delve more into Hampshire, this is a fairly broad section