So the other day I was able to get hold of a FARO Focus X330 and use it to record some archaeology! The FARO Focus is a top-end machine; as the name suggests it can fire lasers over 330 metres away and still receive the returning beam, in a 360 degree arc. It can be used by one person, as it is quite light and is about the size of a small suitcase. It also doesn't take very long for it to capture millions of data points, which provide an accurate reflection of a building/artefact. These can be downloaded and "stitched" together to create a 3-dimensional model (for info on how to create 3-d models and some software to use them, see my previous blog).

So why was I surveying some buildings for archaeology? More precisely, I haven't told you what I was surveying! I surveyed the Gothic Library and the Beacon at the Sir George Staunton Country Park in Havant, near Portsmouth. To those who are not familiar with Sir George Staunton Country Park, it is named after Sir George Staunton, who built up the estate with land purchases over a number of years and created the "pleasure grounds" to house his exotic plants and later his memorials (read on below for more info). The buildings in question are two late Regency-period buildings (both constructed in the 1830's), and the Library was one of the first Regency buildings in Britain to exhibit gothic features. It is octagonal in shape, and has lovely pointy bits on the edges of the roof, plus one very tall chimney on one of these edges (possibly related to the old fireplace inside). It used to be connected to Sir George Staunton's mansion, who was an important British ambassador to China in this period, particularly given the Opium wars of the 1830's which made it even more difficult to acquire Chinese literature. It was illegal for Chinese officials to teach Chinese, or give Chinese writings to foreigners, so it becomes all the more impressive to know that Sir Staunton translated the first law books from Chinese into English, and was one of the founding members of the Royal Asiatic Society! The Library's walls alternate between mortar and brick faces, so I wanted to capture this in detail, to see how they might relate to the old mansion. However, you are also allowed inside the library, and so I wanted to capture any features that may give us evidence that this was used as a library, such as old beams for bookcases, etc. The floor plan of the mansion is very sketchy, and there might have been a second library inside the mansion that was never mentioned...

Wikipedia's image for the gothic library. 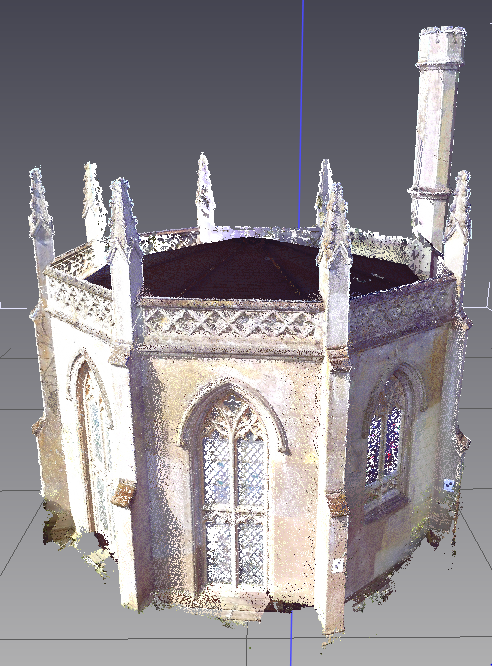 The gothic library as a raw scan. Note how some of the bottom is missing, that's because there are some hedges in the way! 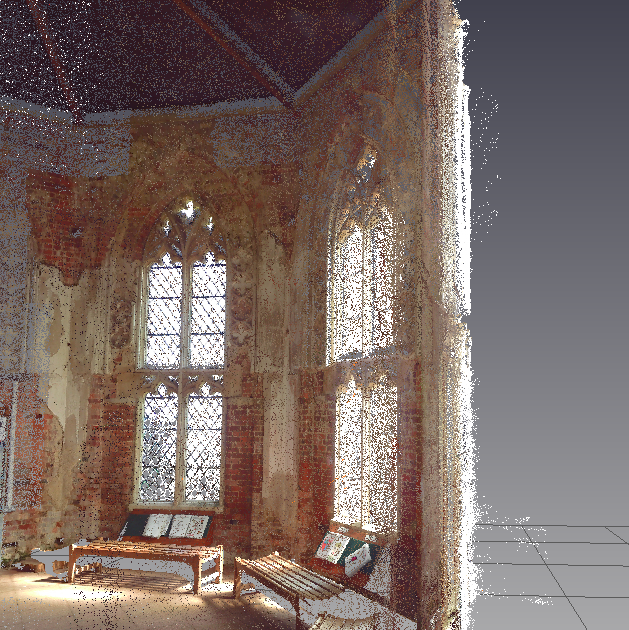 This is a shot of the raw scan of the gothic library's interior, and compared to the photo below, it's fairly accurate, capturing all the detail on the walls (except for the windows, which look like a bullet has just gone through it)! 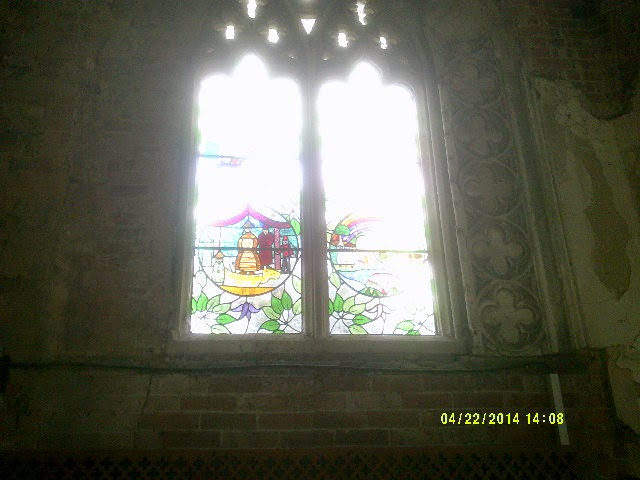 The Beacon, on the other hand, was constructed from the remains of a nearby mansion (Purbrook house), and is entirely coated in mortar, with a brick base. A circular veranda It was built by the same architect who designed the Gothic Library, Lewis Vuillamy and represents a very different side to the architect; the Library was a modern, ahead of it's time structure that preceded the gothic revival, while the Beacon harked back to Ancient Greece and Italy (where he had travelled previously). Because the Beacon is so isolated, it is almost preserved perfectly. But more about that in a second... 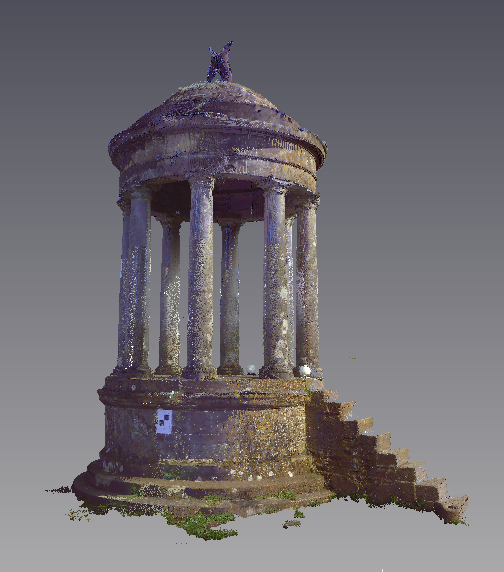 Can you tell the virtual laser scan model (bottom) apart from the real thing (top)? This is after the data has been "cleaned up" with Pointools, one of the more common (yet expensive) software programs for point cloud edits!

I only needed to take as many scans as I needed (i.e. as many as would cover the buildings, since the scans will overlap). The roofs were very difficult to capture because they are blocked, but can be seen clearly from Google Earth!. So I ended up with 25 scans for both buildings, taking about 15 minutes each. This took the whole day, but no other technique could capture the data so accurately and precisely! A photograph doesn't give you coordinates like a laser scan does.

So when the data downloaded, it turned out that:

There are some other cool things you can do with the data, such as showing you the intensity of the point cloud (or where the laser scanner received the most information from). This can tell you things like how reflective a surface may be, especially if it's in an isolated place where you can't tell what material it's made out of, such as the roof of a cave deep underground.

At the end of the scanning and editing process, the scans can be taken into a different software package like Autodesk's ReCap or AutoCAD and digitised to have walls, windows and so on, adding more realism to the model. 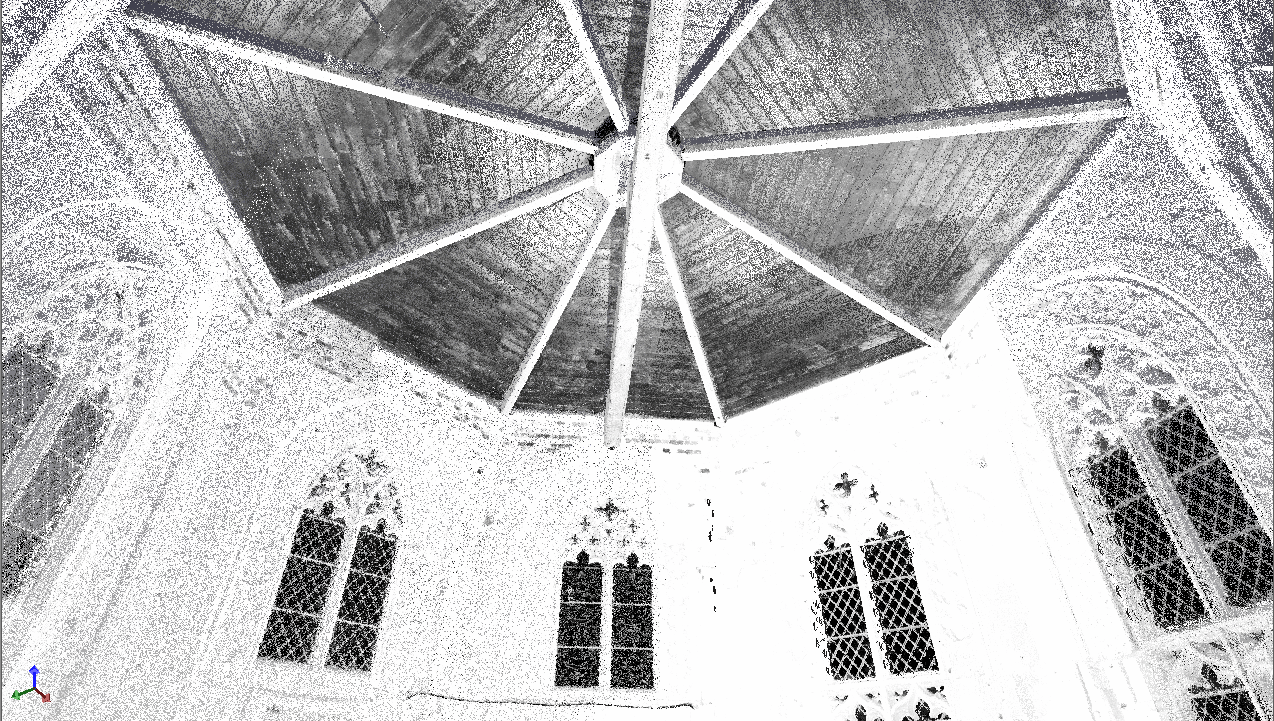 One of the scans showing the intensity of laser points, showing where the laser scan picked up the most points off the walls (from multiple scan). Neat, eh? It looks more solid on one side and on the roof because 3 scans were taken of the gothic library, and these were unevenly distributed around the room.

So you'd be forgiven for thinking that laser scanning is a quick and expensive way of finding cracks in buildings! But it can also reveal new, previously unknown features about a building. The cost is coming down all the time, although at about £25,000, this isn't something that can be done on a whim! As always the right archaeological questions are required.
Posted by Alistair Galt at 05:20